This build is an exercise to see what features and capabilities can be built into a custom quadcopter frame, from readily available off-the-shelf components, while no exceeding 250g.

The build starts from a Diatone Blade 180 frame.  This is one of the light frames available on the market.  The actual diagonal motor-to-motor distance is actually 191mm.  The arms from this "180" options has clearance for 4" propellers.  Gemfan ABS 4045 propellers are attached to DYS BX1306-3100KV motors.  Four LittleBee 20A ESC's on the default BLHeli firmware, running OneShot125 and "light damping" regen braking algorithm, controls the motors. 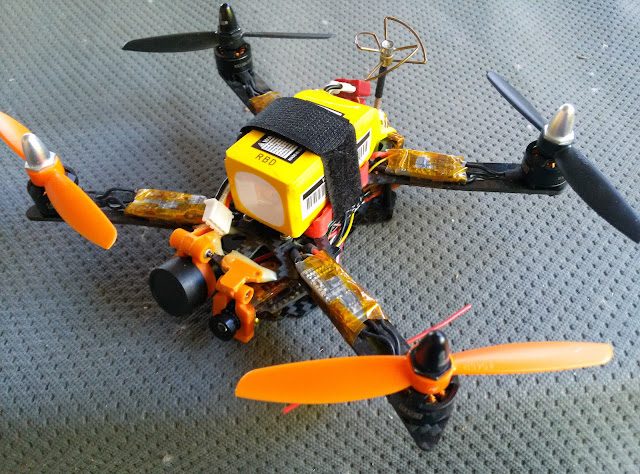 This build is flying on a Mini Revolution flight controller on an open-source dRonin flight stack firmware.  The main reason to use dRonin is the "Autotune" feature which is an automated initial tune process to derive the PID values for any custom quadcopter build.  Manually tuning PID's require many test flights and more importantly, knowledge in how to tune PID's on a quadcopter.  The dRonin Autotune process takes 75sec.  A quadcopter is typically un-flyable without properly tuned PID's.  Other popular flight stack for this flight controller is the LibrePilot.

The RC receiver is a OrangeRX R110X diversity receiver on 2.4GHz DSMX technology.  At the time of the build, this is one of the only sub-2g receiver available.  A 3.3v line is added from the flight controller to power this RX.

A 3S (11.1v) 850mah Li-Po battery pack by Zippy Compact, powers this quadcopter.  On easy flights, each pack charge will get 5-7mins flight time.  The battery is mounted on a 3D printed custom battery mount.  A Lian power distribution board splits the battery cable to the four ESC's.

There are two camera systems on this quadcopter: a First Person View (FPV) system and a recording 1080 camera.  The idea with the layout of this build, is to have the camera payload on the "lower deck", while the basic airframe and flight systems are on the "upper deck".  This is supposed to allow easier build and maintenance.  The camera mounting rings are modded Diatone camera rings.

The recording camera is a Mobius1 camera that is gutted from the stock case, with an 2" ribbon cable extension to allow the camera module to be remote mounted.  The stock battery is replaced with a lightweight 200mah battery, mainly to maintain the camera clock setting, but is also capable to power camera for a ~10min record time, if necessary.  The camera is powered/triggered-on/charged by the main vehicle 3S battery, thru a shared 5v regulator board, via the mini-USB connector.  The current draw on this camera is almost 1A.  The Mobius case half is kept because it contains the heat-sink and the operating buttons.

The FPV system consists of the micro camera, a minimOSD on-screen display chip, Eachine ET200R VTX video transmitter with clover antenna, sharing power from the 5v regulator board.  This is a live video feed system operating in the 5.8GHz range, allowing any FPV goggle receivers to see this video feed.  These typical FPV systems are analog systems because any signal loss only results in static and does not desync like digital systems.
The minimOSD is on the MWOSD firmware, allowing lots of customization on the FPV "HUD" display.  Information such as flight info, heading, artificial horizon, etc. are overlaid on the live video stream with the minimOSD chip.  See the youtube footage below. 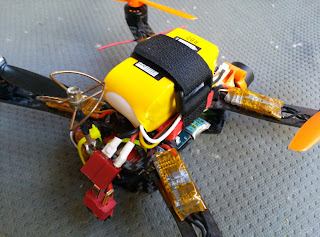 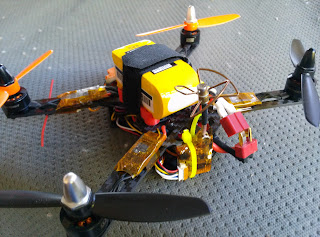 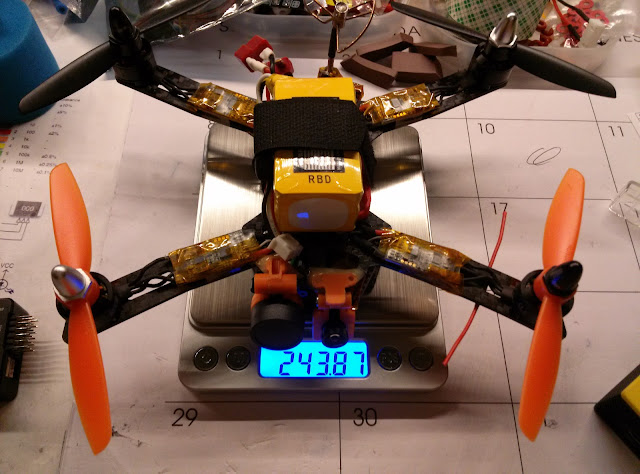